This is the fourth part of a series on On Assignment.

Pick any group of beginning to intermediate photographers roughly equal in experience and enthusiasm. From my years of teaching workshops, I know one thing to be true: Their photographs will show they are sharply divided into either having or lacking a vital photographic skill — the ability to see and use light. Over the years, I’ve learned that looking at light is one thing, but seeing light with an artist’s eye is quite another. In order to improve, a photographer needs more than a mere awareness of light. He/she must understand and respect the tremendous impact the quality, color and direction of light can have in the success or failure of a photograph. Professional photographers earn their living largely because of their ability to use light. They know how to make interesting light happen, whether shooting in the studio or outside. They realize good light is more than important to quality photographs. It’s crucial.

Whether you’re indoors or outdoors, using light to your best advantage usually boils down to three options: find it, wait for it or make it. One good way to practice using light is to temporarily delay looking for a visual statement to capture with your camera. Instead, think first about finding the best light, then make a picture happen there. I was reminded of this concept while shooting a sailboat race in Ketchikan, Alaska. The starting gun sounded in early afternoon. I took a number of shots of the first spinnaker run with the sun overhead. While the surroundings were spectacular, the midday light was nothing special.

Knowing that backlighting held great potential, I crossed my fingers hoping for better light later in the day when the sun would be lower. Late in the afternoon, with the sun just above a bank of gray clouds, I positioned my photo boat on a downwind leg of the race where the sails would be backlit. The boats soon approached, their spinnakers glowing like lanterns.

So, if picture possibilities seem reluctant to reveal themselves, try going where you know the light is good and renew your search there.

And remember to keep backlighting in mind whenever you find yourself photographing on or around the water. When backlit, each breath of wind or swirl of current gives fresh texture to the water’s surface.

What would you do if you were suddenly surrounded by an array of potential photographs begging to be taken? That marvelous moment happened to me during a mass ascent at Albuquerque’s famous International Hot Air Balloon Fiesta. Arriving at the large launching field before sunrise, I found more than 300 crews preparing their balloons to go aloft. As the sun topped the horizon, they began filling the colorful nylon envelopes with air, using big fans and powerful propane burners. As the first balloons began rising, I stood in their midst absolutely stunned. For 360 degrees around me, there were incredible photo possibilities packed with action and bursting with color. At first, I was as frozen as the proverbial deer in the headlights. Shaking away the cobwebs, I took a number of blue-sky shots.

But I soon realized that these were no better than the typical images for the event. Then I spotted a part of the field where backlighting from the sun was turned golden by dust in the air.

Quickly placing a telephoto lens on my camera, I moved closer to find a more interesting shot. With the wonderful golden light leading me, I forced myself to focus on just one composition at a time. Beautiful backlighting highlighted the center of interest — the moment of liftoff — while adding depth to the image.

My intended visual statement was all about the vivid colors and massive size of the balloons, not about the crowd. So I placed the people low in the frame to emphasize the towering balloons. Thanks to the light, justice was done to this visual statement made at the balloon fiesta. It seemed to convey the rush of excitement I experienced seeing so many balloons rising at the same time. I’ve said it before, but it’s worth repeating: given the opportunity, go first to where you know the light is good. Then look for your visual statement. Also note the importance of “gesture” in this picture. Though only a tiny part of the composition, the waving arms made this image more successful.

Shortly after arriving with writer Doug Chadwick at Hole in the Wall Lake in Canada’s Northwest Territories, the sun began sinking behind the mountains. The stage was set with an incredible wilderness scene. And the solar spotlight was on, but only for a few more minutes. We could actually see the mountain’s shadow creeping across the snow. With time short, Doug became the center of interest using a 24mm lens for my visual statement portraying man’s humble stature when dwarfed by the vastness and frozen beauty of nature. I briefly explained where he needed to ski in order to take advantage of the brilliant backlighting. Doug only had time for two passes in front of the camera before shadows engulfed the bright snow.

When outside exploring with your camera, a good way to train your eyes to “see” (and not merely look), is to focus on details of nature. After some practice, you’ll discover that you need to be careful where you walk. You might be stepping on a picture! During a summer assignment along Nebraska’s Niobrara River, I was getting desperate in my search for something worthwhile to shoot. I’d settle for anything making an interesting visual statement about the flora or fauna in or around the river. While hiking a trail late one afternoon, I spotted a small clump of foxtail barley backlit by the sun. Moving closer, I got the good feeling of finally being on to something. I lay flat on my stomach with a 105mm macro lens on my camera. The widest lens aperture, F2.8, provided an extremely shallow depth of field at close focus. That let me completely change the composition with just a slight shift of focus. Playing with focus and camera position, I found three plant stems that offered a center of interest by being in sharp focus. By now, the background was engulfed in shadow. I figured a simple visual statement was best — the eloquent beauty of this common plant, backlit by the sun. Happily, my picture editor agreed. 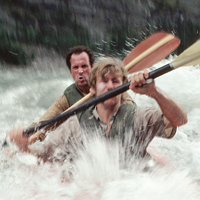 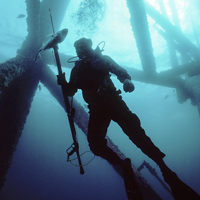 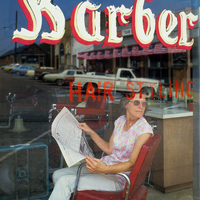