Nikon D2X On the Road

The next night I had to pack and get on an airplane to fly to Memphis to give four seminars on digital photography of jewelry. It was nice that I didn't have to worry about fogged film from any security devices this trip. After the weekend of seminars, it was off to try the camera out. 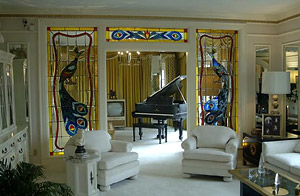 I am showing three pictures here that should not have turned out.

The first one was in Memphis, a hand held shot of a famous front room at 1/6 second, F3.5, 24mm, available light. Everything was shot at ISO 100. I also selected the new, larger color space of Adobe RGB. There were too many other parameters fluctuating and I really wanted to see the maximum that the Nikon D2X would do. I knew this shot was not going to work, gray overcast outside, incandescent lighting, too slow of a shutter speed to hand hold, and they didn't allow tripods, or flash, but so what, it was digital and I could delete it. Click:

Oh! my goodness! Where had this camera and lens been, all my life? I tipped the camera sidewise so my wife could see the monitor, and her Eyes got big and she exclaimed, “If … I … had a camera like that … even, I … could take good pictures.” (She is usually hard to impress. She is not a photographer, and, unfortunately she already knew how many thousands of dollars I had paid for it). The white rug bounced the light into the room and the camera sorted out the auto white balance, exposure, and auto focus wonderfully, as the lens gave me the stability that was necessary. The VR really worked. I usually do not shoot handheld but I might just start again (once in a while). There was a downpour an hour later and we headed south for New Orleans. Tuck the camera under the coat and run.

All the images in this article are drastically compressed so that they will load quickly over the Internet, this wipes out a considerable amount of detail and brilliance in all areas, especially shadows and all but the last one could be nicely improved through an imaging program. All were shot Raw-uncompressed then saved as Tiff and converted to JPGs for this article. The raw images are visibly sharper, than the uncompressed JPGs even on the screen.

With these fast cards, the faster throughput and write speeds of the Nikon D2X, and it’s larger internal buffer, I never had to wait for the camera to catch up with me. It was always ready. The normal reaction for a person is about ¼ second (deciding to do something and then doing it). If, you have already decided you are going to do something your reaction time is usually around 1/10 of a second. The Nikon D2X now has a “shutter” lag time of 37/1000 of a second. That is about six times faster than you are, when you have to decide to do something. In other words you will no longer notice a “shutter” lag time with the Nikon D2X. It will continue to be a discussion for the “technical” but for almost all human and practical purposes the digital lag problem no longer exists if you are using a Nikon D2X.

The next morning we headed for Oak Ally 26 miles west of New Orleans. There are, twenty-eight, 300 year old, oak trees in two rows, and a 150 year old mansion. Click:

That evening I downloaded the image to my laptop and the 17 in. monitor and confirmed that these images were unbelievably sharp. I checked the camera. Auto sharpening was a default. So in my infinite wisdom, I turned it off, because every one knows that the advanced sharpening in Photoshop etc. is far superior and more controllable than in-camera. Later I discovered, Wrong again. The auto-sharp in the camera gives one, optimum sharpness without the degree of halos that you get in
even from Photoshop unsharp mask.

The gradation between the white horse’s back and the black post in places is side-by-side black and white pixels no gray in the original NEF file. You cannot get any sharper than that in a digital image. You can also do it (or undo it) in Nikon Capture but if you use it “in camera” that is one step forgone later. If you are going manual, stick to low or medium sharpening (and none in high contrast situations).

Connie Cassinetto (Via the Lens) on August 6, 2020 in Using the Lightroom Book Module - Part 1

Hi, just got another email from Blurb this morning....40% off. Hope to have second part of article posted soon! Blurb CODE MYKEEPSAKE.

Hello, my best Nikon lovers, I wish you a very happy 20th birthday. I like also to congratulate the manufacturer of our loved Nikon gear. Without ...

Thank you for being so generous in sharing your time and experience based knowledge. I'm sure that many will benefit from your effort.

Read new messages Thanks to all of you! Celebrate 20 years with us - 50% off