Many things in the life of photographers have become easier with many problems of the analog world solved through digital photography. This includes the 36 frames limit and the time we could evaluate results on the light table, slide projector or on paper, as well as operating costs.

On the other hand, digital photography has produced new problems we never even thought existed or that had been of minor importance in the analog times.
This includes the necessity of backups and the need to have a computer to save images from the memory card and transmit or view them and the lack of classic paper albums which you can present on your visit to Aunt Adele to proudly show your offspring.
Of the thousands of pictures on our disks, only few are printed these days. Hardly anybody takes the time to pick out the best shots and get them printed at the lab – not to mention the lack of the good old slide projector.

For some time now a solution to these problems has been available that perfectly fits into the workflow of the digital photographer, even adding a few advantages that have nothing to do with photography.

This solution is the image tank — or as Epson puts it — "Multimedia Storage Viewer."  That long name does not describe all of its qualities. 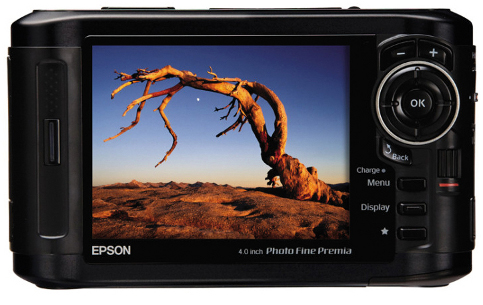 I had seen image tanks before but every time I had money burning a hole in my pocket it all went into lenses, bodies or other accessories. This was knowing the necessity of creating backups on location had me carry my laptop, power cord and all the rest with me while fearing theft or damage.

Enter Hendric, our marketing guru in Donaueschingen. One day he gave me a call, asking me if I would be interested in having a look at some sort of revolutionary updates on Epson's image tanks. Well, that's one of those few occasions on which destiny hits the right head. Sure I wanted to. Not just have a look but also to do a user review since it was exactly the gadget I had been thinking about for so long now.

Now I had the chance to check the little device thoroughly. I could use it in real life and find its advantages as well as possible defects. I could also see how it would fit into an amateur photographer's workflow. This is not a scientific test with statistical proof (with just one sample, it's hard to talk statistics anyway).  It's not a technical or user manual. It's just my personal, subjective impression, and the only answer I seek is the one to my question: is it worth its money? Anything else can be found on Epson's wonderful internet site, together with loads of other gadgets every photographer will be dreaming of (and causing nightmares with our family and bank accounts).

Instant backups on location have been a necessity since digital cameras emerged. In-camera-memory and memory cards have always been limited, never been cheap, and most of us want pictures duplicated as fast as possible (especially in unique events such as weddings, baptisms or similar). On long trips we need to empty our memory cards to make backups, without having to schlep our laptops around in hostile environments.

Image tanks appeared early in digital history: mobile hard disks with slots for the common memory card types that created a more or less automatic backup of our pictures on the hard disk.  From there they could be copied on to our computer back home. With no screen, high energy consumption and mechanical sensitivity they were far from perfect.

A similar concept was that of mobile CD and DVD burners that allowed copying entire memory cards directly to disc. I liked those burners very much (especially on trips, where copies for friends and relatives on CD or DVD could be burned the same night in the hotel with no computer around). But technical improvements on the memory card side of life had me depart from my beloved burners.  A CD covers something like 700 MB, a DVD around 4,7 GB — both far from being sufficient for the 16 and 32 GB memory cards residing in my DSLR today.

Simultaneously, costs of memory cards have come down tremendously since I first started with digital photography in 2004.  I have always spent around EUR / USD 120.00 per memory card. In 2004 at that budget our local vendor handed me a 512 MB card over the counter. In 2009, for the same amount, I get a very fast 16 GB, or a slower 32 GB card. A valid alternative to any backup system may well be a good bunch of memory cards.  Get five of my standard 16 GB cards, and there will be room enough for more than 6,000 RAW-pictures shot with my D300. Or twice as much and more, if you prefer JPG out of your camera. That should be enough for a long weekend without having to clear one memory card.

Camera producers too helped making image tanks as pure backup media superfluous.  Bodies such as the Nikon D3 or D300s with their double card slots allow for automatic backup on two memory cards at the moment you press the shutter release (2 CF cards on the D3; a CF and a SD card on the D300s). This could mean no more time lost for backups. For just the cost of an additional set of memory cards you press the shutter — and your collection of memory cards will do the rest.

So, producers of image tanks had to come up with something special for photographers to have us put these devices back on our wish list. And that's what they did!

I guess this week-end I will fill my "Multimedia Storage Viewer."

Thank you for this review. I guess now I can easier make a good choice for saving of huge amount of images.

I am a happy owner of one of the predecessors of this model, the P-2000. With a modest 36GB capacity (for 9 4GB CF memory cards) it has served me well for a full week of shooting during ANPATs. I can vouch for their convenience, reliability and effectiveness in the field. It is nice to see the expanded capacity for similar street prices and a new set of accessories included. Good review, thank you. Time to upgrade ;-)

Having purchased the P-700 when Nikonians announced the firmware 2.05 update (from the Europe site) for tethering, I was able to get the P-700 to control my D200 and D70 after installing the firmware upgrade and setting the cameras' USB option set to PTP. I should note that to get the tethered shooting, you will need to download and install the firmware update that provides this feature.