If you've had your photo taken for your driver's license recently, or a mug shot, you've probably noticed the result wasn't the most flattering image you've seen of yourself.

Why is that? The exposure is usually fairly close. The "photographer" is using a tripod, so the photograph isn't out of focus. Here's why -- you more than likely got blasted straight on with a camera mounted flash. Had that Department of Motor Vehicles official or law enforcement officer been more concerned with making a good photograph than they could have taken one simple step to make you look your best: they could have moved the flash off camera.

I'm not saying on-camera flash is inherently bad. In some cases, and in the right hands, it can work in a photograph. However, by moving your flash off camera you open up a world of possibilities for improving your pictures.

First, in my opinion, a flash fired on-axis with the camera's lens seems to flatten the subject. Shadows are gone, replaced with flat light blasting in from right where you're shooting. But that's the problem. Shadows aren't bad. Shadows add dimension, and dimension makes a photo stronger. Simply put, dimension can take a photograph from looking like something your niece shot with her point-and-shoot at the latest family get together to an image that you'd see hanging on a gallery wall.

Scroll back to the top of this post and look at the image of the flowers. For this shot, I positioned my SB-600 in a shoot through umbrella to camera left, directly next to the flowers to provide side lighting. The umbrella was approximately two feet from the left-most flower. I fired this flash using Nikon's CLS, so I was able to use my D7000's pop up flash as a fill, dialing it down to 1/32nd power. This is no prize winning photograph, but there is nice tonal range and dimension across the flowers and leaves. Now compare that to this shot of the same subject.


If this bunch of flowers were getting its driver's license, we'd have a winner! Notice the "flatter" feel to this image -- the shadows along the leaves and flower petals aren't as distinct, and the entire image has much less tonal range to it. It's not an awful picture, in my opinion, but the side lit version is much more interesting.

The second benefit of off camera flash is that you gain control over your light. This is pretty easy to grasp. Put that flash on your camera and you have the ability to light your subject from, well, one position. Before any of you get all uppity in the comments about how you can always bounce off a wall or ceiling, let me see you do that outside in a park. Now, take that flash off camera and put it on a stand and you've got all sorts of options.


The above shot was taken with the camera's pop up flash set to TTL. At a 250th of a second, we're getting rid of all ambient light here, so the flash is providing all of the light for the exposure. Not bad. The subject's face is well exposed, the shirt looks good. A winner, if you like flat light and little dimension.


With the light at camera right, 45 degrees, and the pop up working fill light duty, we get a much nicer image. Notice the wrinkles in the shirt and the shadows along the subject's right side of his face. In my opinion, this makes for a much more realistic looking photo because we've added dimension by controlling our light. One caveat I'll add here, all of the photos here have had no processing done to them and were shot against a black background in order to show the light hitting only the subject. Had I been more concerned with creating a finished photo, I'd have lit the portrait a little differently to get some separation between the subject's head and the black background. Nonetheless, as you can see, going off camera gives you an incredible amount of control.

Going for Rembrandt? Move the light 45 degrees to either side of you, bring it a bit up above your subject and you're done. Need to separate your subject from the background? Well, move that light stand off to the side and slightly behind your subject and fire away.

You also don't have to think that you're limited to one light. And here's the kicker, I don't mean you need to add a second speedlight into the mix, though that's not a bad idea either. What I'm talking about here is recognizing that if you're outside, you already have one light -- the sun. If you're inside, the ambient light can be used as a background light or a fill light. Beyond this, if you need fill and the ambient is cutting it, find yourself a neutral wall, set your subject up so the wall is three or four feet off to the subject's side, and fire your flash from the opposite side. The bounce from the wall will give you the fill you need, and if it doesn't, just move the whole kit-and-caboodle a bit closer to the wall.

And then there's mood. You can certainly add mood and feeling with an on-camera flash, but nowhere near the extent that you can by taking the light off the camera. If you have a few hours to kill, rent an old film noir movie some evening and notice the mood the directors are creating with light. And I can assure you they're not doing it with the lighting slapped on top of the cameras.

Well, you need a camera and a designated flash. If you're shooting with a recent Nikon digital single reflex lens (DSLR) and a recent Nikon flash, you'll be able to fire the flash off-camera using your on-camera flash as a commander. If your camera's flash can't be used in commander mode, or if you're not using a Nikon flash, you'll need a set of radio triggers so your camera can talk to your flash.

Technically, this will get you where you want to go. However, if you have the resources, you might want to get a hold of a light stand and a light modifier, say an umbrella. Even if those aren't available, a ball bungee cord and anything you can find to diffuse your light will help you make a better photograph.

Once you have your gear, you're basically going to follow the same techniques you use for flash photography when the flash is on camera. Those processes are beyond the scope of this post, though. If you need a brush up, head on over to the Nikonians Speedlight forums and join the conversation!

Read all articles in this series: 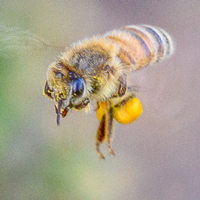 Apparently the people at the department of motor vehicles have no sense of artistry...everything is flat, indistinct, and without character...But again, doesn't that describe government in general?

Thanks for the comments folks. Garrett, you're correct, even here this wouldn't suffice for a driver's license due to the 3/4 shot. Though they do allow smiling. And as Amy said, I was being sarcastic! @Dale -- I'll be getting more into how I arrive at settings as I move further into this series. As for setting up a commander mode, see below. @Gerald - To start, you'll set your SB600 up to fire wirelessly by holding down the zoom and minus buttons, then turning on the wireless functionality from there. You can adjust the group and the channel that it's set to, though you should be fine to leave it at it's default, which I believe will be Channel 3 Group A. From there, in the D7000's Custom Settings menu --| e:Bracketing/flash --| e3: Flash control for built in flash you'll choose Commander Mode, then in the following screen you'll be able to dial in your pop up flash to use either iTTL, TTL, Manual, or just serve as a signal for your SB600. If you choose M for manual, you'll be able to adjust the power of the flash. The -0.3, -0.7 values you're seeing are flash exposure compensation values that are used when the flash is in either iTTL or TTL mode.

For me to try and increase my knowledge, I need to know how you arrived at the setting you used on your SB600 and I still (even after reading the manual) do not understand how to set up a commander mode! Perhaps this is destined for a later episode, if so I will be looking forward to it. Dale

He was being sarcastic, Garrett!

For a driver licence in this part of the world, you need a straight on face shot with a white background and NO smile!!!