In the fall of 2010 Epson introduced the highly anticipated replacement of their very successful 17-inch model Stylus Pro printers. Going back to 2003 Epson began offering a 17-inch companion to their wide format 24 and 44 inch professional inkjet photo printers. Their first model in the 17-inch size was the 4000. Epson shocked the printing community with this release because for the first time you could make a print on fine art matte paper and immediately load resin coated photo paper and make another print without skipping a beat. The 4000 had both matte black and photo black ink cartridges installed in the printer simultaneously. All you had to do was select the correct media type setting for your particular paper and the printer would intelligently select the correct black ink. Since each black cartridge had its own slot and ink line you didn’t even have to wait for the printer to flush the ink line and load it with the other black ink. Fantastic!

This was my first professional Epson printer and it sparked a passion that I carry with me even today. The 4000 had it all – a high capacity paper cassette, roll paper compatibility, automatic paper cutter, front and rear paper loading capability, Epson’s latest print technology and the venerable Ultrachrome ink. It was truly state-of-the-art at the time. Then a few years later the world seemed to come crashing down on me. With the announcement of the update for the 4000, the 4800, Epson had by then moved on to a new inkset called Ultrachrome K3. This set of ink now had the addition of a second light black called light, light black. This was a huge boon to photographers, the quality of prints improved greatly and the black and white image crowd was especially happy due to the increased tonality. But this improvement to print quality came at a huge sacrifice – at least to me, and based on the internet buzz at the time, to a LOT of other 4000 owners as well. There was no other way to put it - Epson was taking leap back into the Stone Age. In order for Epson to accommodate the new light, light black ink cartridge they had to revert to the old process of having to swap matte and photo black inks in order to configure the printer for the respective papers you wanted to use. Want to print a portrait on Premium Luster? Fine, if you happened to have the photo black installed at the time. But what if you forgot to print that last landscape on Velvet Fine Art for tomorrow’s exhibit? Rats, time to switch cartridges to matte black at a cost of about $50 / €35 worth of ink, perfectly good ink that simply ended up in the maintenance tank.


This ink swapping continued with the release of the model 4880, essentially the 4800 with the addition of the Ultrachrome K3 with Vivid Magenta inks. These gradual updates gave us incremental improvements in image quality but the printer for the most part was still the same mechanically as the initial 4000 model. Soon after the 4880 was made available to the public Epson introduced two new printers in their wide format line in 24 and 44 inches that came with a truly new set of inks and technological improvements both in the algorithms used to lay down the ink dots and generate smoother tones but also in the automation of operation. The new 7900 and 9900 were a significant move forward and what made everyone smile was that these two printers now had all inks installed simultaneously thus eliminating the need for swapping out the black inks. Following the design of their 3800 Epson incorporated a system where the photo black and matte black cartridges each have their own slot but they share ink lines running to the print head. Although switching from a photo paper to a matte paper requires the flushing of the ink line it uses only a fraction of the amount of ink compared to the older process.

Well, with enough background out of the way let’s introduce the Epson Stylus Photo 4900. This new printer while incorporating a lot of the features of the larger 7900/9900 is a brand new design. It hardly resembles the 4000/4800/4880 models. If it weren’t for the paper cassette there would be no resemblance at all. Beginning with the physical appearance of the printer Epson has come up with a sleek new color scheme using black and a putty gray color. The paper cassette is now recessed into the body of the printer making it look a little more compact although in reality this printer is slightly bigger and significantly heavier. The design is much more elegant than the older models in the 17-inch series. At the time of this writing Epson had not released an optional stand so you’ll need a good size tabletop. The good news is that Epson has informed me that a stand will be available June 1, 2011 in Europe and hopefully soon afterwards in other markets. You’ll need enough space to accommodate its slightly larger footprint taking up most of the space of an average sized desk. Make sure it is a sturdy desk too since this printer weighs in at 115 lbs / 52kg. compared to 89 lbs / 40kg. for the 4880. Dimensions are 34"(W) x 16"(H) x 30"(D). You don’t need much clearance in the rear since all paper feeding is done from the front of the printer.

The Ultrachrome HDR inks are already well documented since the release of the 7900/9900 so I won’t go into much detail other than to say these inks feature the inclusion of orange and green. The 4900 is a 10 +1 ink printer with the +1 being the photo or matte inks which are not used simultaneously. Currently the 4900 uses 200 ml size ink cartridges as far as I know there are no plans to offer other sizes. Epson continues to improve their printing technology and the 4900 has the latest and most advanced screening algorithms in the industry. The AccuPhoto HDR screening technology working together with the latest MicroPiezo TFP printhead and Ultrachrome HDR inks produces incredibly lifelike color and smoothness at print speeds twice that of the previous models.There is also a second model of the 4900 called the Designer Edition. This model comes with a highly accurate in-line spectrophotometer developed in partnership with X-Rite. For those who require a complete color management process with a high level of automation this is the perfect solution. When driven with the latest RIPs you have just what is needed for the most demanding proofing applications.

Finally, Epson in its ongoing commitment to providing the imaging industry with the utmost in quality, reliability, and consistency has steadily introduced a line of extraordinary papers to compliment their printers. The Signature Worthy line of papers is now in full fruition with the addition of their Hot and Cold Press papers. Epson has combined their old standby Premium Luster Photo, Velvet Fine Art Matte, and Traditional Photo Paper (Exhibition Fiber called in the US) with these new Hot and Cold Press papers to put together a truly fine collection of gallery quality print stock. 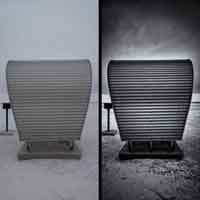 How and When to Convert to Black and White "L" Brackets for Ballheads
Login to add your comment

Thanks Ernesto. I am in the research stage, wanting to upgrade from my R1900. I am leaning towards the 4900. I wonder whether the designer edition for me is worth considering.. I just want my prints to look as close to what I see on my monitor as possible

Ernesto I am jumping into the fray as a novice nikonian and a green photographer (using nikon 7000 w. for 2 years and printing for just over a year on a starter epson artisan 837). I've been able to coax some pretty fine 4x6 prints from the artisan but now that I'm ready to go to larger prints, I'm looking at my options. Other than the purchase price, what other factors would you take into account if trying to decide between the 3880 and the 4900. I live in Bermuda, which also comes with high shipping costs and distance from repair shops. Thanks Fred

I'd have to agree with you Ernesto in your evaluation. I've had my 4900 for almost a year now and everything you say about it (and the Signature Worthy Papers) is true. I use the Premium Lustre paper for my traditional prints delivered to customers, for things such as portraits and have fallen in love with Cold Press Natural for much of my fine art work, as well as a nice 'upgrade' for portraits. The 4900 is a true workhorse and a pleasure to use.

Ernesto, Thank you very much. Excellent on-hands review... Looks like my old faithful 4000 is soon to be replaced. Thanks for the bonus insights on the new papers as well.

Very practical and helpful review. I am thinking about the 3880 but, if I'm correct, it seems that the 4900 has, in some instances at least, better image quality (and from what I've read the 3880 has very good image quality)?

Ernesto, thank you for Epson review on the 4900. I am keeping my eye out for a new Epson printer as I have the old 2200. Do you know much about the new 3000? I was recently in Orlando at the PSW and speaking to an Epson rep he said the new 3000 is awesome.

Your review is informative and appealingly presented, Enesto. It displays writing skill and relevant material selection. Unfortunately, it makes me contemplate replacing my beloved 3880, which I could never justify on a cost basis, but might have to consider on a "image" basis.

Nice review, Ernesto. This printer sounds truly exceptional. I also got a lot out of the comments on the Signature Worthy papers. I just receive the Sample Pack, and have been using VFA, so it will be great to compare, although I am printing on a lowly R1900.