HOW TO RECORD VOICE MEMOS ON THE D2X

Now let’s talk about how to use the voice recorder. In Figure 1 below you will see the simple controls that you use to record voice memos. Notice the little microphone button near the right bottom of the image monitor. It is the primary control you’ll use for both recording and playback. The little speaker near the left bottom of the image monitor allows you to hear images you have recorded in the field. Also, note the little MIC next to the WB button. You’ll speak into this MIC.

Here are the simple steps to record a voice memo after shooting a picture:

1. Take the picture
2. During image preview (viewing the image on back of the camera) press and hold the little microphone button. (minimum of 1 second, maximum 60 seconds)
3. Speak into the little MIC. Use a normal voice from about 3 or 4 inches away from the back of the camera.
4. Release the button and look for the microphone symbol in the upper left corner of the image.

Each image that has an accompanying voice memo will have the small microphone symbol in the upper left corner. Then, as you scroll through the images, you can see which ones have voice memos. Of course, this microphone symbol is not actually recorded on the image itself, but is simply a display to let you know a voice file is available for the image you are viewing on you camera’s image monitor.

To replay the voice memo, simply do the following:

1. Bring a picture up on your monitor on the camera’s back that has a voice memo symbol.
2. Press and release the microphone button.

These steps will work on your D2x without doing anything special. It is the default method for voice recording. You can set the camera up to automatically record a voice memo after each shot is taken WITHOUT holding down the recording button. Plus there are other types of voice recording you can accomplish by setting various custom controls in the Shooting Menu of your D2x. See pages 145-151 in your manual for details.

Below is an image I took recently while at an aquarium. The image is of a Pacu fish. It is a member of the Piranha family, but is a vegetarian piranha. I only remember this because I used the voice recorder. Click the image to hear an actual voice recording I took with my D2x in the live environment. 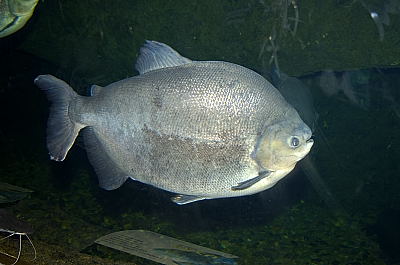 Now, you have the ability to very thoroughly document each of your images. You have detailed EXIF exposure information built into each image, and you can attach a voice memo up to 60 seconds long with each image.

Nikon has given us a powerful tool to better document our images as we are taking them. Try it…you’ll love it! 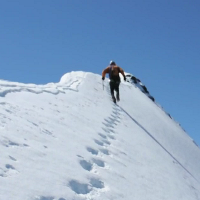