In this article I am discussing printing big format images. When I say big, I mean really big; We are talking about a 56 x 24 feet (17 x 7.5m) photo mural that I mentioned in my first article, which is now up for more than two years in Chicago’s South Loop area. If you love taking photographs as much as I do, I can tell you that there are pretty much no limits to what you can achieve with your resulting images. 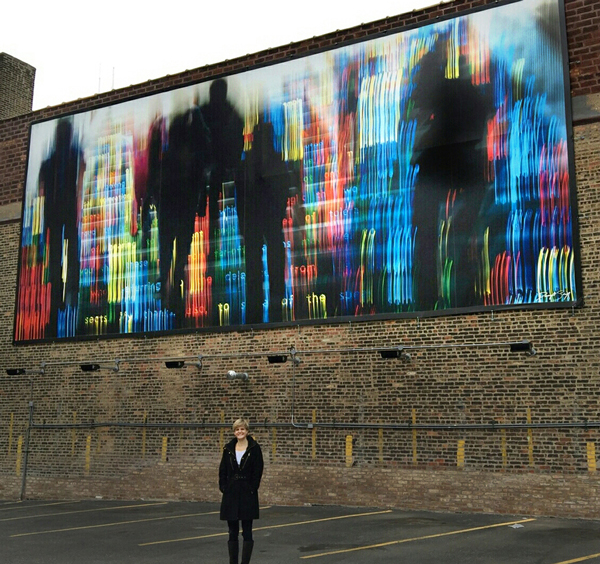 The story starts about three years ago. I had recently hired a new assistant, Lauren, and she was telling me about this project to help beautify the South Loop, which is immediately next to Chicago’s booming downtown. At the time there were many blank, exposed, unattractive walls in the area and Mark Kelly, then one of the heads of Columbia College, got tired of seeing them and started contacting artists to paint murals to beautify the area. At the same time the Wabash Arts Corridor was formed, an urban lab for "creative expression, innovation and excellence in the arts". 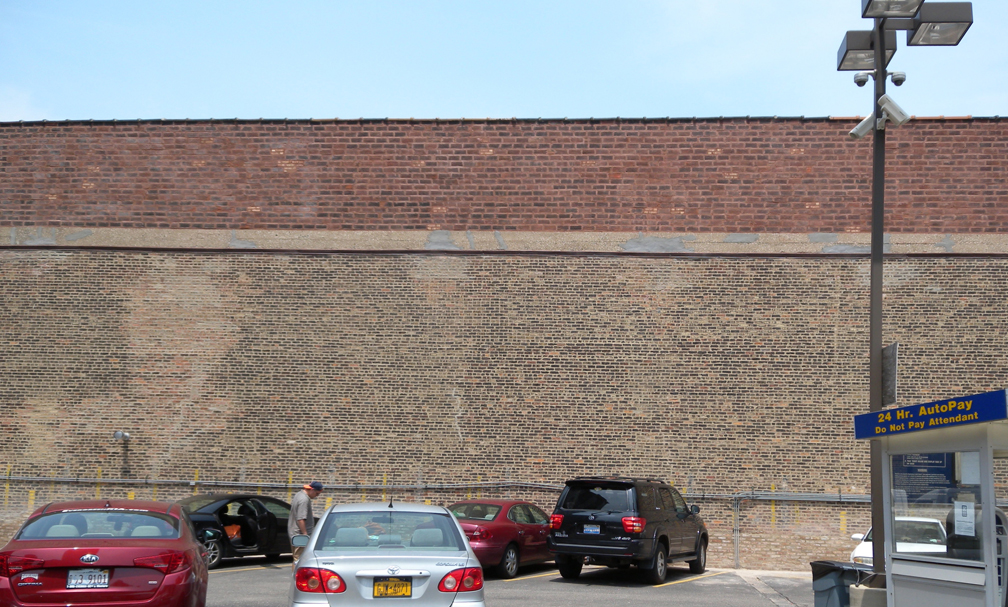 Lauren had recently graduated from Columbia and proposed that she would contact Mark to see if he would be interested in having a photo mural being a part of the project. I thought it was a good idea, not thinking that this would actually happen. To my great and pleasant surprise, within a few weeks Lauren had set up a time for Mark to come by the studio, to look at my work and to discuss the possibility of using one of my pieces.

The next thing I knew Mark is looking at my “Descending to Heaven” series in my studio and telling us that “The Parade Commences” picture from the series is the artwork he wants up. Little did I know it would take almost six months of work and planning for this to become a reallity.

At the time, this mural project was relatively new and we had to convince building owners and have written agreements. As more and more people saw how much the ambiance of the neighborhood improved, it became easier to the degree that people were coming and asking for murals to be put up on their buildings. But at the time it took over two months of talking and negotiating with the building owner to get a signed agreement for my mural.

As mentioned, up to this point the murals were painted on the buildings, but here I was, commited to my photo mural insisting that it be true to my original picture. Painting was out and I couldn’t print this in my studio, even though I have two large Epson printers capable of delivering endless 60 inch (1524mm) wide prints. We are though talking about a 56 feet (17m) long and 24 feet (7.5m) high print on material that had to last outdoors through Chicago summers and winters. On top of that we embraced Mark’s idea of having the mural lit at night; it would be the only photo mural in the area and the only one you could see 24 hours a day. 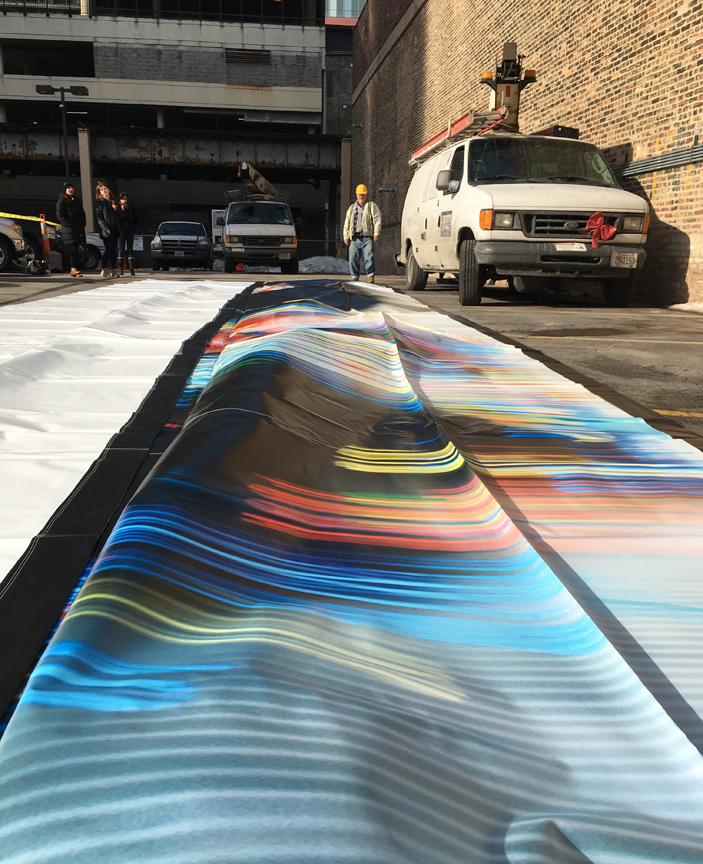 Now, if you were a painter all you would need, besides yours and an assistants time, was gallons of paint and a “cherry picker” hoist to reach the heights needed for painting. But we needed a printer to do this massive piece of artwork with the colors and resolution faithful to my vision. And, there was no funding available.

The artists were donating their time, supplies and energy, and we estimated this was going to cost at least $18,000 USD in total. After reviewing the options, especially since I didn’t have an extra $18,000 USD to donate to the project (it was going to cost me a lot of money just in donating time, mine and that of my assistant), we decided we would raise the money through a crowdfunding site.

Without going into all the details, it was a three month ordeal. We had to figure out what and how to do the rewards for the donors, to do a video for promotion, to call and email people to ask for help and to send out the rewards. Thank goodness it was a big success and we raised over $20,000 USD in the end, needing every penny of it. 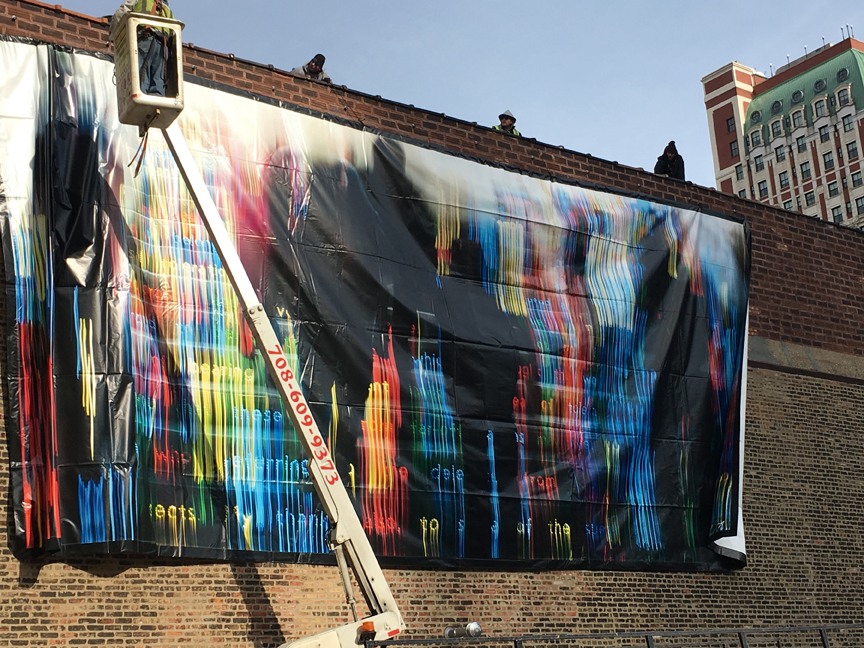 Before I get to the final results, let’s talk about my Nikons and how you get from that little sensor inside the camera to such a huge piece of art now decorating a building.

At the time I took the photograph which became the mural, I was using a 28-105 lens on my Nikon D300. With its 12.3MP sensor, the D300 is a far cry from my Nikon D800’s 36.3MP's, let alone my upcoming D850 with its 45.7MP sensor. I shot it in RAW though, which I almost always do when thinking about post production. RAW files give you more latitude and for big prints better results compared to JPEGs, which might work fine when there is little, or no post-production requirements. 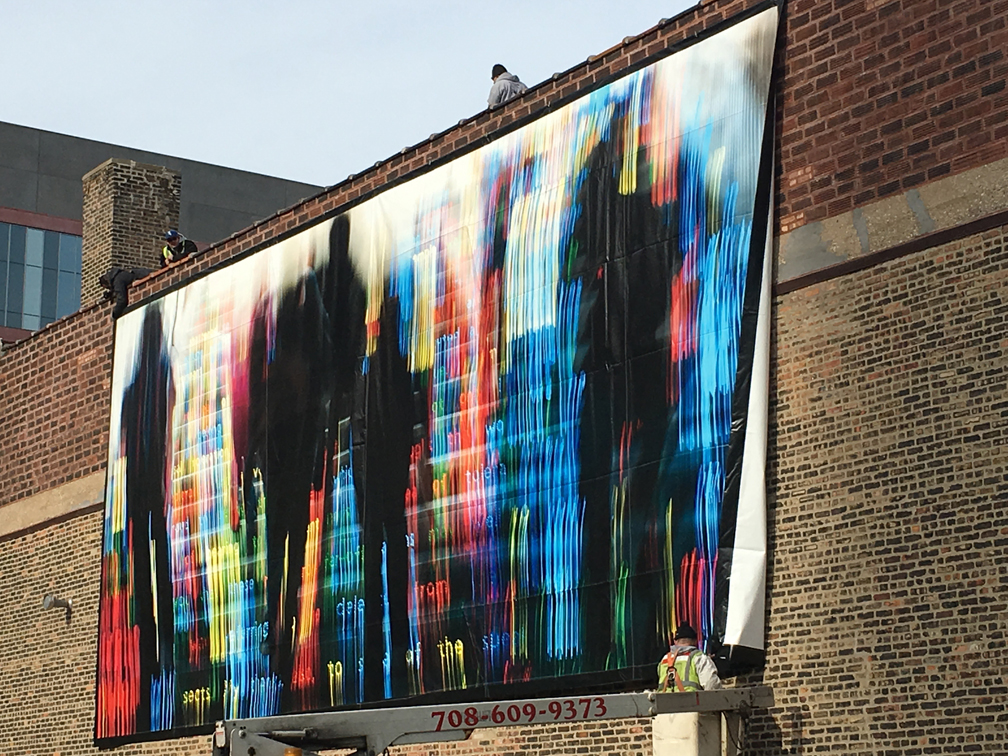 I work almost exclusively in Photoshop and when you open up the RAW file from the D300, the resulting file is at around 50MB in size (Editor's note: 12.3mp x 3 channels, each 12 or 14 bit per pixel). But still, a 50MB file is nothing when you are thinking of an enormous mural.  I started processing the file the way I normally do for a lot of my own large prints, using the ON 1 Perfect Resize Photoshop plugin (Editor's note: This is a software for enlarging images applying interpolation algorithms using fractals). There are a few companies that make similar software and Photoshop’s own tool is also quite good.

I resized the picture as much as I thought it and my computer could take and ended up with a file over 1GB in size, which I turned over to my friend Doug at Gamma Imaging here in Chicago.  Doug has done large outdoor fine art pieces before, so I was confident that working together we could produce the results I wanted. One thing to remember is that the resolution of the picture can be directly proportionate to the viewing distance from the photo. An 8x10 inch (20 x 25cm) picture in a frame on a desk or on the wall should have a higher resolution than a mural that’s 15 feet (5m) off the ground. This was going to be printed on the same outdoor vinyl material that billboards are printed on, but we changed the resolution on the printers and tweaked the sharpness and colors as much as we could to make it look better than a normal billboard.  But nevertheless, even though I saw tests, its one thing to look at those and another to get to the actual size mural. 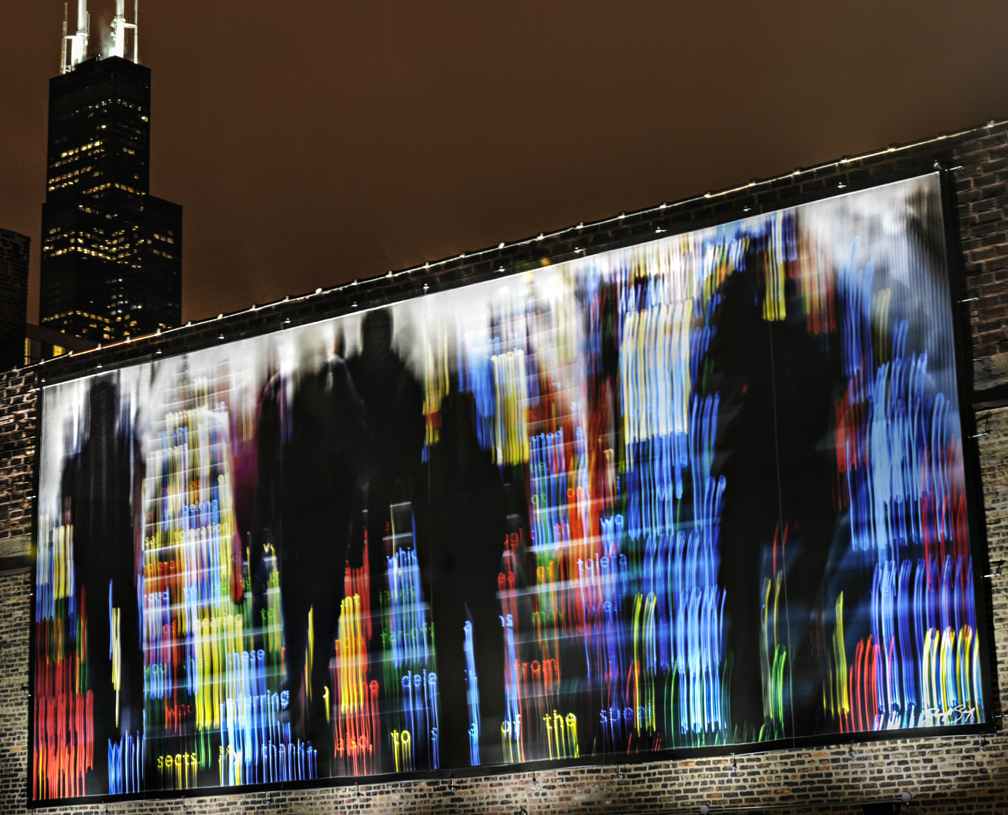 I was quite nervous when the mural went up January 26th, 2016 as it was the first time I was able to see the whole piece!  We had an unveiling and opening party on the 28th at my gracious friend Kim’s Elephant Room Gallery which is right around the corner from where the mural now sits. If you can get to Chicago, please go by Wabash and 8thStreet and see the actual amazing piece.

Editor's note: We have some other articles related to enlarging for printing, which might interest you: Black and White “In Your Own Backyard” Re: On1 and viewing distance algorithm. I don't believe On 1 has a viewing distance algorithm regarding sharpening. You can find charts on the internet, for example at this link http://resources.printhandbook.com/pages/viewing-distance-dpi.php but this is more for dpi setting rather than sharpening. When I do sharpen my pictures I don't have a specific formula I use. I vary the amount of sharpening for each picture just by what I feel is right.

Does ON 1 provide viewing distance algorithm when sharpening for output?

Here is a short time lapse of the mural being installed https://vimeo.com/153792081 Thank you everyone for your comments. Darryll

This was quite an effort, however, much concern about having the required resolution for a photo like this is really pointless because there are no areas of the image where focus or resolution is necessary, as the image is,IMHO,a "mess of blurry, unorganized shapes with very little structure". Not something I would go out of my way to appreciate. To each his own, I guess. Nevertheless, the mechanics of getting an image to that size is a feat, separate from the subject matter, of course.

Amazing photo, and what a nice project in which to be involved. Wonderful! My questions are similar to John Hernlund. There is a lot more technical information of the final product that can help the reader. I do a fair amount of enlarging (alebit never to this size) before sending to production and there are a various formulas that can be used to judge the PPI based on the viewing distance and the size. I also use a RIP (for the lack of a better term - as we are not really "ripping" in printing fine art photos) when I enlarge and print on a wide format Epson. So yes, having a bit more technical information would really help readers understand how to think through an "large" enlargement in general. Congratulations again - extremely well done - now I am curious and interested in looking at the rest of the photographs in the series. Cheers!

This mural is impressively vibrant and alive when I was saw at the WAC two years ago for the first time. I'm a big fan and very glad it's still up there as one of the most significant public art piece of Chicago. As an art student from the Art Institute, I really appreciate how you share your techniques behind the camera and the your story on how you made this project come alive.

Wow Darryll, it is an amazing photo and project. Lots of questions...Who did the printing, in the end? What was the resolution (and format) of the final file? How did you manage to get nice color saturation in such a giant printer? How many liters of ink were used (I imagine it was an ink jet process)? How did you smooth out the folds in the print? Did you glue it to a flat surface that was placed on the side of the building prior? How much did the print weigh? What kind of paper/material is it printed on, to survive the elements? What is the source of that amazing ink?

Great article, Darryll. And a wonderful project that is obviously a success. Thanks for the behind the scenes view of what went into this project. It's quite an effort in terms of both time and money but teh investment obviously produced a spectacular piece of art.

You can do a drive by on Google Street View, but can't really get close enough to enjoy.